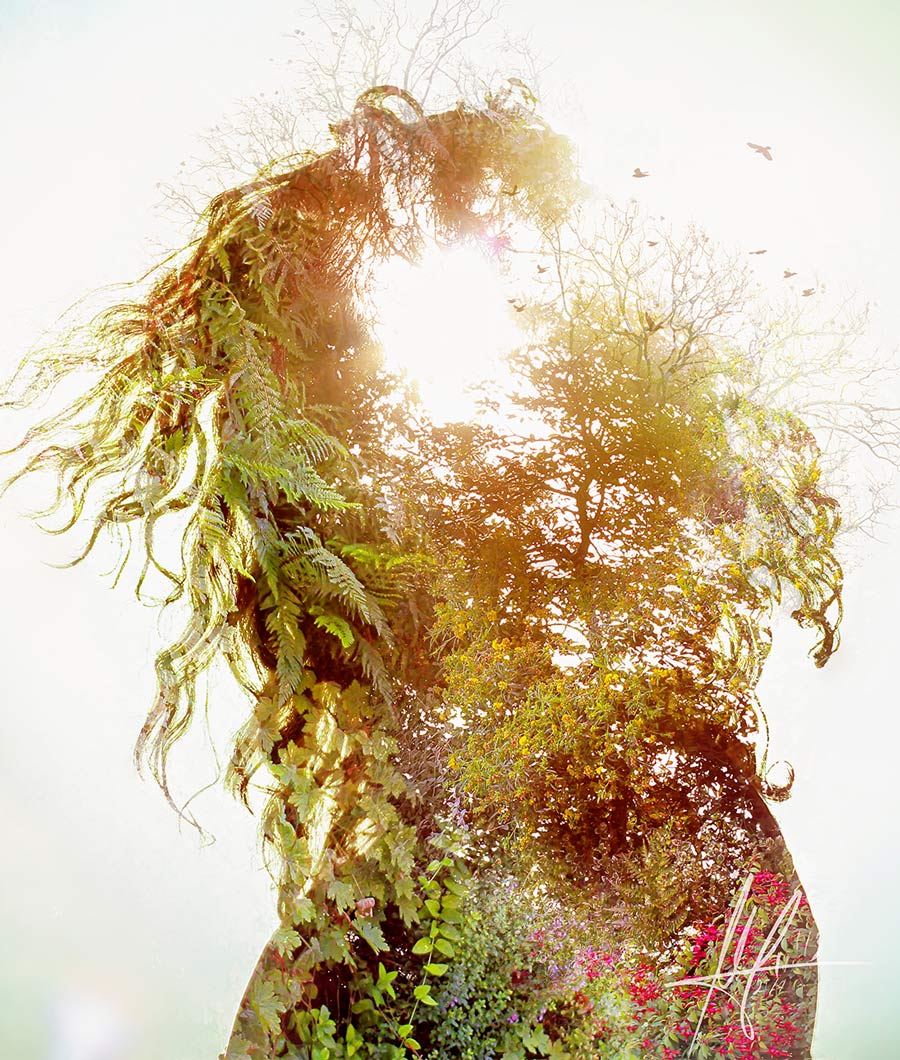 About a decade ago, I travelled to La Fuente del Rey, which is a small condominium in the mountains of Cieza, in the Region of Murcia (South of Spain). It’s a paradise on Earth with amazing sunsets and landscape views. Natural water drafts cross the land and create lush, beautiful reservoirs. During one of its beautiful sunsets, I took my photography equipment to do a photo session with my friend Marta Ochando. It was raw and improvised, and I took mostly photos of her in the countryside backlit by the golden light of the setting sun.

Once I arrived to my studio in Madrid, I created a series of digital double exposure photographs using the main photos I took of Marta and mixing them with long exposure photos of the very same landscape and also close ups of plants and greenery of the area.

Creativity to recreate the moment

I remember that time in my life as something very powerful, when some of the best moments I’ve ever lived happened one after another. I wanted to portray that with a simple series of photographs. Something showing enlightenment, peace of mind and serenity (mind you… that’s the total opposite of my main line of work but… why not?).

My idea was to create a whole series, but I ended up only creating a handful of them. I always considered these a minor set of pieces, so after I published them I ended up forgetting about the project (mind you, again… “Does this guy ever finish a series?”. Not really, but the closest example is my collection Psychoclimatic Conditions and my other photography series Memories Collector). Now that I think of it, and after revisiting these photos, I’ve come to the conclusion that this just needed to be a triptych. In perspective, now I can see the story that these three images create, and I’m amazed at how I was unable to see that when I shot them. 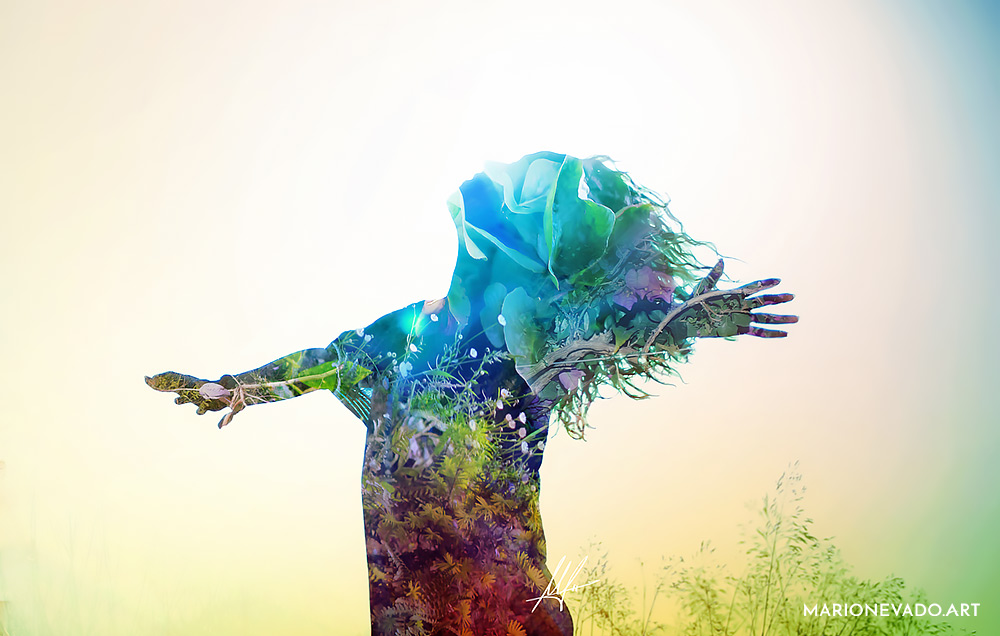 Internal Landscapes I: Release. Click on the image for prints.

But life is full of ironies and something I never expected was for people to ask for prints of these pieces. Over and over again, years after their release. I sent some copies to one of my wholesalers to see how they would perform in sales, and boy, was I surprised.

Three of them performed remarkably well, so I decided to reedit them to the public. I doscovered that three of them worked remarkably well as a tryptich: Release, Wisdom and Will. It’s funny that I never noticed that. There’s a sotry being told between the sun and the plants. One coming after the other. I newly found something poetical in these photos, and then I wondered why I put them into a drawer for almost a decade. I guess I’m just too focused in making ultra baroque, over the top super complex compositions that I just don’t pay attention to my efforts while doing something minimal and contained. 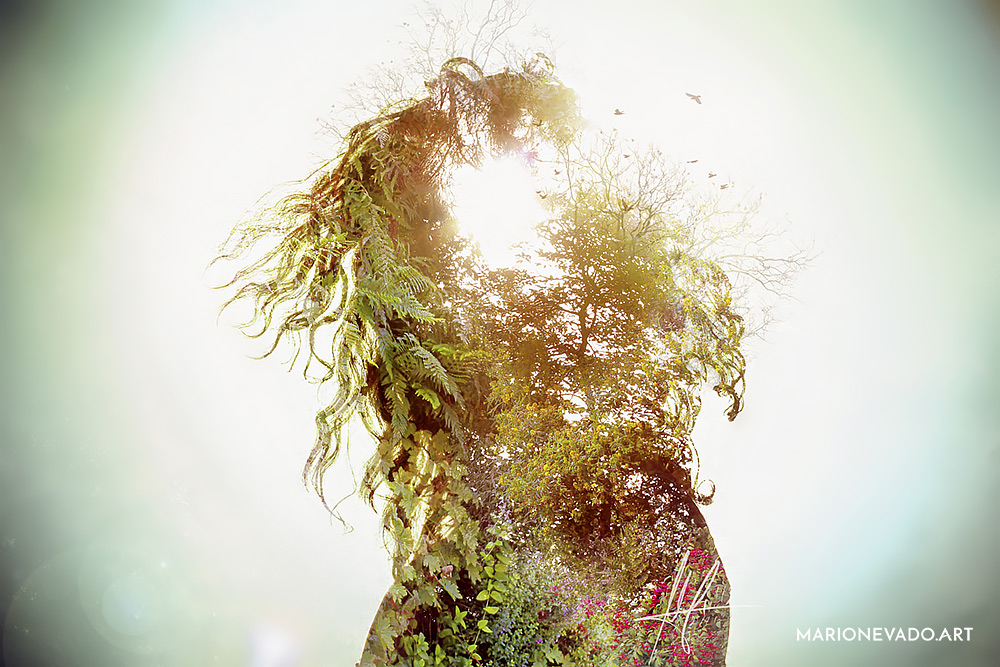 Internal Landscapes II: Wisdom. Click on the image for prints.

So here they are, almost ten years later. I remastered and cleaned them to make sure that they would work as best as possible in interior environments. While doing it, I discovered a newfound love for these photos. They were created in such an iconic landscape, surrounded by friends. They have a  whimsical touch to them, despite their simplicity. Now that I look at them, I think they are full of mystery and serenity. I might get them printed on big canvases for my own house someday.  That’s if I manage to find any free spots on the already crowded, horror vacui-esque walls of my home.

You can find these pieces already available on my Shop. I’m releasing them in both big and small formats. 🙂

If you’ve come this far, thanks a lot for reading. I had forgotten these photos but now I can see how important they are to me. 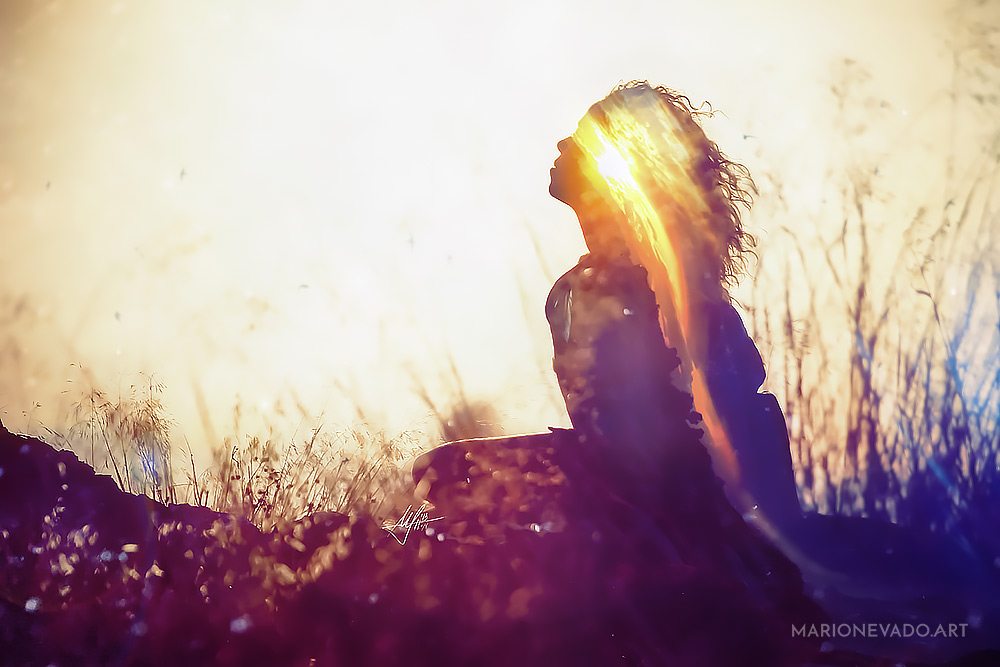 Internal Landscapes III: Will. Click in the image for prints.

I don’t believe in coincidences. But when I was doing the restoration of the photos, I was invited to La Fuente del Rey. Again by Marta, the original model of the set. So I’m packing my things and leaving to the other side of the country to relieve the experience. This time with no equipment, just my will to breath the fresh air in the mountains. The hope to share some wisdom with my friend. To release all the contamination I’ve got in my lungs after living so many years in the big city.

This trip to La Fuente del Rey didn’t have any photoshoots, but it had a jamming session with her. Maybe we are recording some songs? 🙂 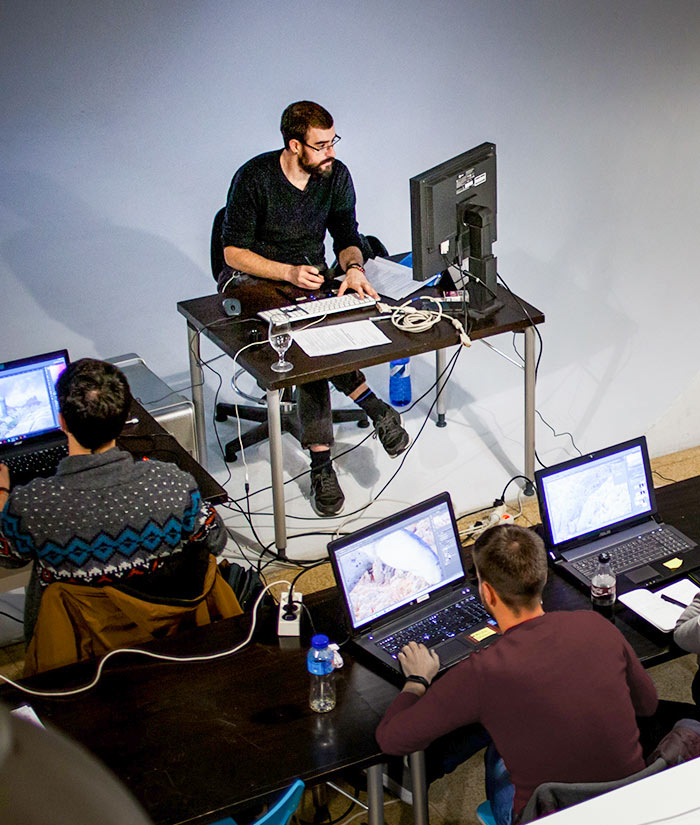 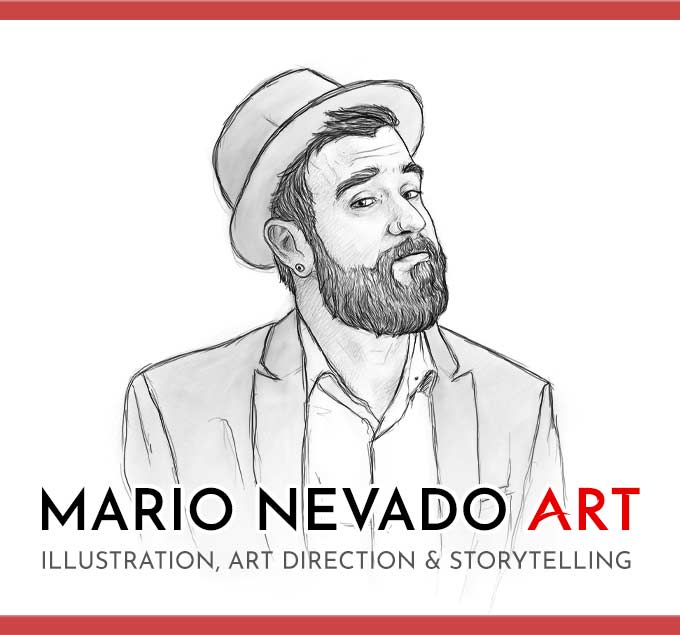